A Ukrainian refugee who fled her hometown and now lives with her boyfriend’s family in Scotland has explained how vacuum bombing turned her hometown into “hell”.

Natasha Matiusha, 29, from Chernihiv, heard a deadly vacuum bomb kill 20 people and destroy a school 800 meters from her home as she feared for her life on the bathroom floor of her home.

Natasha is now safe and lives in Bonnybridge, Falkirk, with her future in-laws, Helen and Donald MacKinven.

Natasha Matiusha, 29, from Chernihiv heard a deadly vacuum bomb kill 20 people and destroy a school 800 meters from her home

Her boyfriend, Lewis Pantony, 26, who hopes to marry Natasha later this year, helped her escape to Warsaw, Poland, where she stayed for two weeks before heading to Scotland on March 28.

Natasha left her brother, Alexey, 44, fighting in Ukraine, and also had to leave her cat, Solomon, who escaped when he was frightened by the shelling.

She described being in Scotland as a vacation feeling and hopes to one day be able to return to Ukraine.

Natasha said: “It’s extremely painful to see what people are going through and it’s all kind of surreal.

“What’s wrong with these people?” What they are doing to the Ukrainian people is genocide. 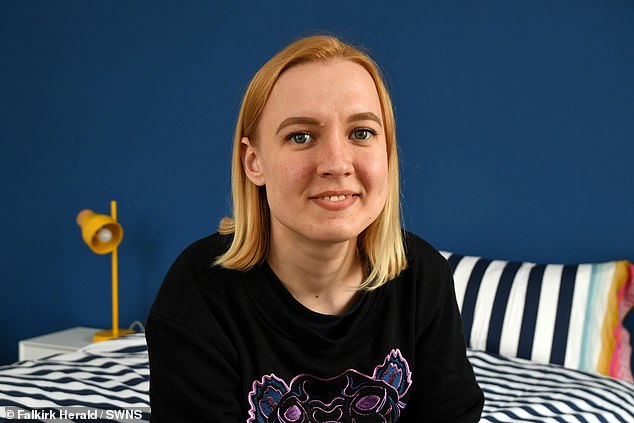 Natasha left her brother, Alexey, 44, fighting in Ukraine, and also had to leave her cat, Solomon, who escaped when he was frightened by shelling

She returned to Ukraine in September last year after working in China, where she met her partner and hoped to visit Scotland under different circumstances.

Natasha said her brother was skeptical about the chances of a war breaking out, and it came as a surprise when she got a call from a friend who works as a police officer.

She said: ‘I hadn’t slept well that night, had terrible dreams of being trapped and realized my phone was ringing.

“I couldn’t figure out who was calling me.

“When I answered she told me not to ask questions, but that’s really bad. Go to your cellar to shelter yourself.

“I opened the window and heard the explosions.

“I also saw neighbors racing their cars to escape.

“That’s when I ran to wake my brother up and told him we had to get to safety.

“We didn’t have a cellar so we went to the bathroom.

“We took my cat and our emergency bags that everyone had been encouraged to have since the 2014 invasion.”

Over the next few days there were constant air raids and the population was put under a curfew, only being able to light their homes with a single candle when night fell.

A river runs through the town and as shelling continued, coming from both Russia and Belarus, bridges were destroyed making travel difficult.

After talking with friends, including the contractor who was helping renovate their house, Natasha finally convinced Alexey that they should flee. 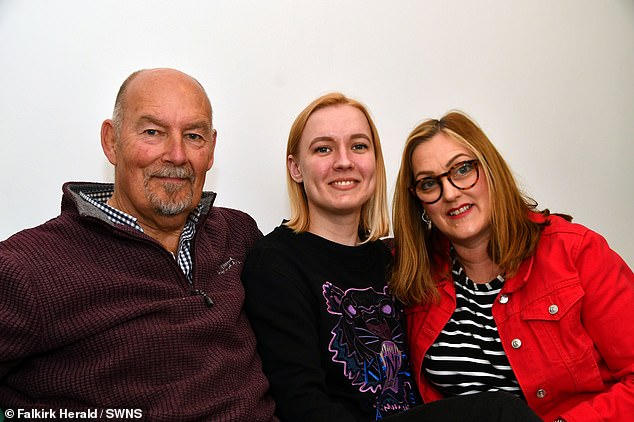 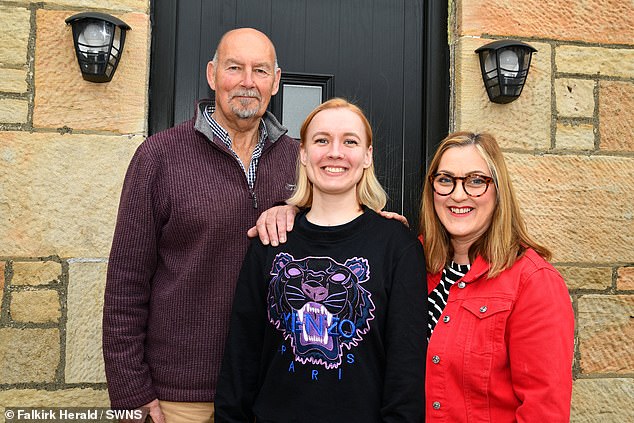 Natasha is now safe and lives in Bonnybridge, Falkirk, with her future in-laws, Helen and Donald MacKinven

Her cat, Solomon, however, escaped when he feared the shelling and had to be left behind – despite being well cared for by neighbours.

She described the terror of the vacuum bomb and said: ‘It was a different sound than I had heard before and I was convinced I was going to die.

“They were looking for shelter as a wing of the school was being used to provide humanitarian aid.

“But that’s gone now, just like much of where I grew up.”

Natasha said, “Although I didn’t want to leave my friends, my family and my country, I knew it was too dangerous to stay.”

“Hell was happening there.

“We were in a convoy of about ten vehicles that traveled isolated roads and constantly passed checkpoints.

“Before, I was shaking holding my documents before they waved us through.

“I saw a small sign on the side of the road that said mines and when I told the guy at the checkpoint he nodded and said ‘keep on the road’.”

“Normally the journey would take three hours, but it took us 14.”

Only women and children were allowed to board the train, and Natasha had to leave Alexey.

She said, “I had to say goodbye to my brother and I didn’t know if I would see him again.”

He wanted to go home and help with the humanitarian effort, just like his friend Anastasia, 20, who had traveled with them in the convoy.

Unfortunately, Natasha has since learned that she was killed.

Eventually, after traveling by train and bus, Natasha arrived in Warsaw, Poland, where Lewis had managed to secure a hotel room for her.

She stayed there for two weeks, but had to move every other day to another hotel.

On March 28, she learned that her visa had been granted and she arrived at Edinburgh Airport two days later.

She says the past few weeks have been “weird” with so many changes.

Natasha said: “One minute I was in Ukraine, then Poland and now Scotland.

“It’s a strange mix of emotions. I’m getting used to the new realities but I still feel like I’m on vacation.