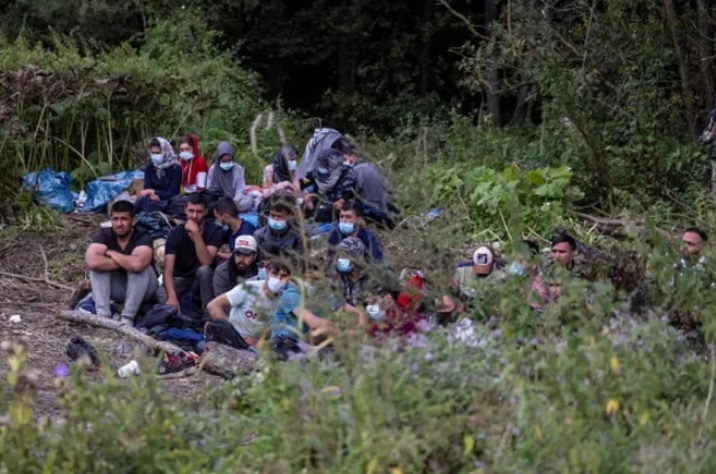 Poland’s Catholic bishops have appealed for solidarity with the refugees amid mounting tensions on the country’s border with Belarus.

A group of migrants trapped on the border between Poland and Belarus, near the Polish village of Usnarz Górny. / Wojtek Radwanski / AFP via Getty Images.

WARSAW: Poland’s Catholic bishops have appealed for solidarity with the refugees amid mounting tensions on the country’s border with Belarus.

In a recent statement on August 22, the bishops described the situation on the Polish-Belarusian border as “worrying”. “Recently there has been a disturbing phenomenon on our eastern border, where people from various countries are trying to get to Poland via Belarus,” said the statement issued by the Polish Bishops Council for Migration, Tourism and pilgrimages.

“These are – not rarely politically stimulated – the consequences of the wars in Afghanistan, Iraq, Syria and more, leading to the exodus of many people fearing for their own safety.

We are aware of the complexity of the geopolitical conditions at the origin of the current migratory processes. “We are confident that law enforcement officials will fully respect international obligations to those seeking protection, including the right to seek international protection. ”

Poland, a central European country with a population of 38 million, has sent troops to secure the roughly 250-mile border with Belarus as record numbers attempt to cross the border. More than 2,000 people have sought to make the crossing so far this month. Since August 8, a group of 32 migrants has been trapped in a border area near the Polish village of Usnarz Górny.

“Border guard officers, faced with the difficult challenge of protecting the country’s borders, should be able to direct people crossing the border to centers for foreigners,” said the statement signed by Bishop Krzysztof Zadarko, president. of the Council of Bishops for Migration. , tourism and pilgrimages.

“State support is also required for the activities of refugee support organizations, which have been limited in recent years. ”

The Council of Bishops called on Polish Catholics to maintain the Christian tradition of welcoming foreigners in need.

“Indifference is not a genuinely Christian attitude. Let us ignite in us the imagination of mercy that will allow us to unite to help those in need, thus undertaking the mission of the Good Samaritan, ”he said.

“We call on people of good will – regardless of their religion – to show solidarity with those who come to us as war refugees, persecuted or destitute. ”

The bishops’ council noted that for centuries Poles have been forced to leave their homeland due to war and occupation.

“They have benefited from the help of people of other cultures and religions,” he said. “To deny newcomers their basic rights is to turn our backs on our own history and deny our Christian heritage. “–ANC