International artists of the caliber of Muse, Blue, Robbie Williams, Tom Jones, Sting, Placido Domingo, Nickelback, Bryan Adams, Red Hot Chili Peppers, Prodigy and Scooter have settled in Radisson Hotel Kaunas, and it is also the hotel of choice for the organizers of this European Capital of Culture 2022 when they bring the media to observe an important moment of the festivities in progress.

If any of them return to the upscale Radisson, they’ll likely notice changes, as renovations have been carried out at this largest hotel in Lithuania’s second-largest city, and the 206 rooms are now described as scandinavian style. This means that they offer light, clean colors and wooden details for a comfortable and quiet stay.

From the window of the Budapest Times hall, one can see at an angle the impressive domed roof in neo-Byzantine style and the upper half of the Church of St. Michael the Archangel, now affiliated with Roman Catholics but consecrated in 1895 as a Russian Orthodox.

The church took four years to build and is also known as the Garrison Church, as it dates from when Kaunas was part of the Russian Empire and was largely for the use of the Russian Orthodox garrison of Kaunas Fortress.

The church stands imposingly at the eastern end of Laisvės alėja, the main pedestrian street which stretches for 1.6 kilometers, almost exactly one mile, and is the longest pedestrian street in Eastern Europe . Laisvės alėja translates to Liberty Boulevard or Liberty Avenue. It’s less than a five-minute walk from the Radisson, and anyone wandering around will find the street split into two alleys by a median strip lined with lime trees. There is plenty of seating, a fountain and tulip beds. 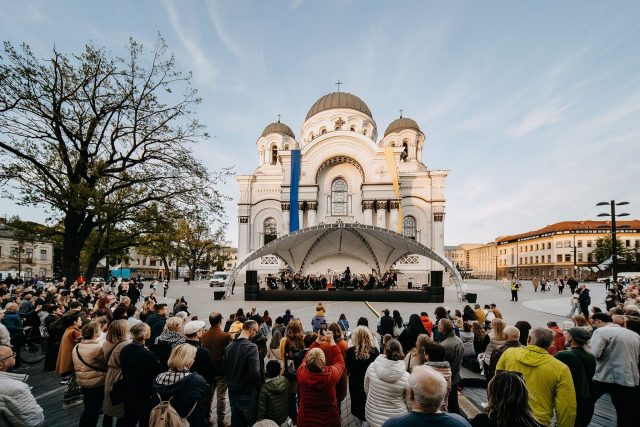 Vehicles can only cross in a few places and the wide path allows for outdoor people-watching at a range of cool restaurants and cafes. Here and nearby are an abundance of notable modernist buildings that make Kaunas stand out in the region. Many of them were created in the interwar period, when Kaunas was the capital of Lithuania. Discover such important places as the former Central Post Office, Kaunas Municipality, Dairy Center, Romuva Cinema, Officers Club and much more.

A particularly poignant memorial is a memorial plaque and fresh flowers remembering 19-year-old Romas Kalanta, who set himself on fire on May 14, 1972, with the events that followed leading to the birth of the so-called “Kaunas Spring “Anti-Soviet demonstrations which involved thousands of people and took place mainly in Laisvės alėja. Next to the street there are 19 rocks in a park, one for each year of Kalanta’s life.

Kaunas and its Radisson are busy in May as the European Capital of Culture program enters an important phase. “Kauntastic” is the buzzword that has been making the rounds in the city these 12 months as it has the continental star, shared with two others, Esch-sur-Alzette in Luxembourg and Novi Sad in Serbia, Serbia being a candidate country for membership of the European Union.

Today, a few dozen journalists from the neighboring Baltic states of Estonia and Latvia and other countries such as Poland, Germany, the United Kingdom, Denmark, Croatia, Finland and Hungary were invited to Kaunas to experience the second of three particularly important events on this “one big stage for Europe”.

Guests stay at the Radisson, which features an on-site casino, restaurant, gym to keep up with their fitness routine, spa, and sauna. Saulėja SPA promises exceptional peace to anyone who wants to escape from the hustle and bustle (although Kaunas is a rather relaxed place) via a list of beauty treatments, rituals and procedures. And in the Olympic Casino you can… well, win or lose money. Or, in May, witness the thrilling finale to the English Premier League football season, as the games room doubles as a sports bar.

Business travelers to the hotel will find one of the largest meeting and event centers in the region, accommodating up to 1,200 people and equipped with state-of-the-art technical equipment. In the 206 rooms, all have tea and coffee-making facilities, comfortable beds with soft linens and large TVs with Chromecast. This latest feature is a technology that allows you to stream your favorite entertainment and apps from your phone, tablet or laptop directly to your TV. 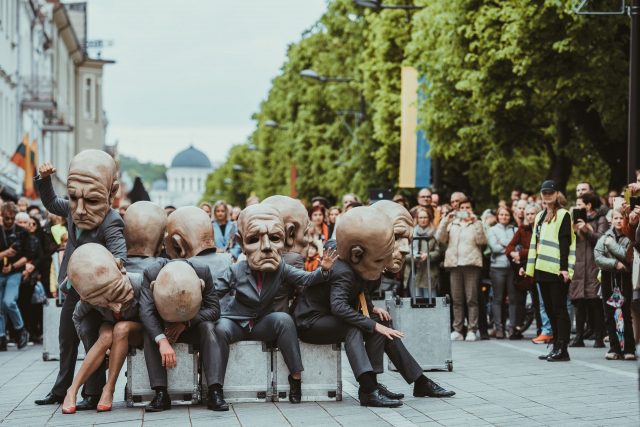 The stats don’t necessarily paint the full picture, but in Kaunas they’re hard to ignore. The city’s big year includes more than 1,000 events, with more than 40 festivals, 60 exhibitions, 250 performing arts events of which more than 50 are premieres, and more than 250 concerts. The Kaunas 2022 team numbers some 500 people, alongside 80 local partners and 150 foreign partners. At the cutting edge of current events, some 2,000 artists and 1,000 volunteers are involved.

They are particularly busy during the three weekends of The Contemporary Myth of Kaunas trilogy. Act I was “La Confusion”, which opened the year of culture from January 19 to 23, Act II was “La Confluence” from May 20 to 22 and Act III will close the year with ” The Contract” from November 25-27.

The Confluence refers to the fact that Kaunas lies in the embrace of two rivers, the Nemunas and the Neris. Nearby are Kaunas Town Hall Square, Santaka Park and Kaunas Castle in the heart of the Old Town. Metal walkways and porte-cocheres lead to unseen courtyards while Kaunas is also a place of modern trappings – giant murals on the side of the building, dropped off scooters, bike rental stations, cafes galore and , lately a lot of yellow and blue flags and other symbols showing unity with Ukraine under attack. 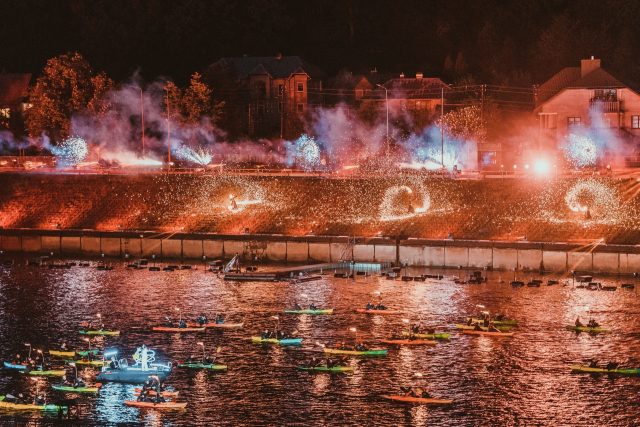 The European Capital of Culture program continues throughout the year in Kaunas and the Kaunas region, with hundreds of traditional and beginning events, including exhibitions, festivals, performances and other activities created by local and international artists and communities of Kaunas.

The whole place is going culture crazy. You better believe it. For what’s happening and what’s to come, check out the full Kaunas 2022 schedule at https://kaunas2022.eu/en/