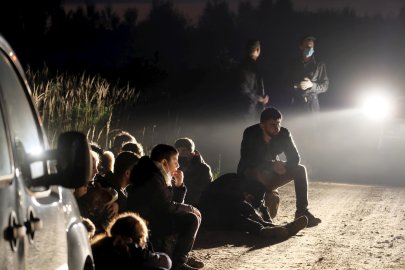 Latvia has become the last Baltic state to start repelling migrants in the hope of crossing its border from Belarus. Dozens of people were turned away on Tuesday evening as part of a new state of emergency declared by the Riga government.

Tuesday evening, the press agency Reuters reported that Latvian border guards have started pushing back migrants hoping to cross the border from Belarus. The two countries share a border that is 170 kilometers long.

Latvia is the latest Baltic country to start the practice after more and more migrants have started traveling from Belarus in hopes of being part of the EU bloc. Last week, Lithuania also announced that it would start pushing back migrants who tried to come under its jurisdiction.

Reuters journalists witnessed the pushbacks, which occurred “just hours after Latvia declared an emergency to prevent migrants” from crossing the border without the correct documents. The state of emergency went into effect on August 10, around the same time that Lithuanian lawmakers approved the construction of a fence along their border with Belarus, the news agency reported. Agence France Presse (AFP).

‘Border … practically closed to everyone’

According to AFP, the new law means that “the border between Latvia and Belarus will be closed to practically everyone,” said Latvian Prime Minister Krisjanis Karins. Most of the migrants are believed to be from the Middle East, Africa and Asia. Latvia has a population of around 1.9 million and is a member state of the EU as well as NATO.

Lithuania now reports that more than 4,000 migrants have entered its territory since the start of the year, and Poland, which also shares a border with Belarus, said 349 migrants had arrived in their country since Friday 6 August. On Tuesday, the EU announced that the number of crossings had “significantly decreased”, according to AFP, since Iraq has suspended its flights to Belarus and is also starting to bring some of its citizens back to Baghdad.

In the early hours of Wednesday morning, about 30 people across the border, “including women and toddlers, started a campfire to warm up after a night of walking through the northern fields. from Belarus to the border “.

“It’s so cold and the children are sick”

One migrant, calling himself Rawa, said his group was made up of Kurds from Iraq. They had arrived in Minsk via Iraq and Istanbul with the intention of crossing into the EU.

“We wanted to stay here and live in Latvia. Please help us just because [it is] so cold and the children are sick, “he wrote in a text on the Belarusian side of the border, for Reuters. He asked for help in the text and also for the issue of the United Nations children’s agency UNICEF. He claimed that the Latvian guards “shouted at the migrants to return to Belarus and scared them with a patrol dog”. However, Reuters saw “no evidence of violence against migrants”.

The commander of the local border guards, Lt. Col. Ilmars Aispurs, confirmed to Reuters that the group had in fact been turned back at that border and was told that if they wanted asylum, they had to travel about 30 kilometers further to claim it.

According to Reuters, the group was pushed back to Robeznieki around 3 a.m. The group was on foot and carried only small bags and backpacks. A sort of “stand-off” followed, reported Reutersbecause the “migrants refused to retreat”. One of them reportedly shouted in English: “Please help me! Baby is so cold!”

A 31-year-old woman calling herself Lilouz said she came from Dohuk in Iraq with her five children. She said she walked six hours overnight to get to the border. Reuters said she was sitting on “the damp grass with the other migrants, visibly tired and scared”.

Around lunchtime on Wednesday, Rawa texted that the group had decided to “retreat” to a Belarusian village “to rest and eat.”

A spokesperson for the United Nations refugee agency UNHCR in the Baltic States said Reuters that they were “deeply concerned about the reports of the pushbacks”. UNHCR said it was sending a mission to Latvia to discuss with the government and ensure its response was “in line with international obligations and European law”.

The Latvian government, its neighbors and the EU have accused Belarusian President Alexander Lukashenko of “arming” migrants in order to pressure the EU to cancel its sanctions regime.

‘Driving to the Latvian border’

Latvian border guards said the migrants they spoke with explained that they spent a few nights in a hotel in Minsk “before being taken to the Latvian border, and then were told to walk some distance. direction”. The guards claimed that some had been told they would “end up in Germany” and had paid “several thousand US dollars for the trip.”

Guards patrolling this stretch of border said they had arrested around 200 people over the past four nights, all of whom were sent to the Mucenieki migration center near the Latvian capital Riga.

The Latvian Interior Ministry said Reuters that since the promulgation of the emergency legislation allowing the possibility of refouling migrants at the border, 59 migrants had been turned back but “a greater number had been authorized to enter and taken to migrant centers”.

“We will act very resolutely”

An EU spokesperson added that the guards were allowed to redirect migrants to an official border crossing point, saying that “such measures are acceptable, as long as (…) the fundamental right of the persons concerned to ” be protected against refoulement [pushback] and access to the asylum procedure are respected at all times.

Latvian Prime Minister Krisjanis Karins urged the entire EU to take a firm stance on the issue, making sure to demonstrate to Belarus that trying to send migrants across the border into the bloc was “pointless” .

“We will act very resolutely,” Karins told a Latvian TV station according to the Baltic Information Service SNB.

With Reuters and AFP