When Verner arrived, he found that three large tents had been set up outside the station – one with hundreds of beds to sleep in, another filled with clothing and supplies, and a third manned by people from World Central Kitchen, a non-governmental organization that provides meals to displaced people. populations around the world.

Verner looked around, picked a spot not too far from the catering tent, and started playing.

The children began to gather, then the adults. Someone brought in a small table and Verner’s first gig was underway.

It is not uncommon for such journeys to begin this way. Since founding Magicians Without Borders in 2003, Verner and his wife (and “magician’s assistant”) Janet Fredericks have traveled to some of the world’s most war-torn places, bringing love, laughter, magic and hope to refugee children. and orphans. Sometimes, like last month, he comes alone with just a few names and numbers.

“A lot of times the places we go are in chaos, or it’s hard to find someone who has time to respond to an email from some mad Vermont magician,” he said. “Then we just have to go.”

Soon, however, word begins to spread, names and numbers multiply, and a network forms.

According to the United Nations, almost 7 million Ukrainians have left their country since Russia invaded on February 24. About half of them fled directly west to Poland.

In Krakow, a city the size of Seattle located 260 kilometers from the Ukrainian border, the population has increased by more than 25% in two months, as government officials and community organizations scramble to welcome around 200,000 refugees.

During a two-week stay in Krakow, Verner visited abandoned hotels, schools, and other buildings that had been hastily turned into shelters, giving a total of 24 performances in front of thousands of children.

For a few days, he worked for the United Nations High Commissioner for Refugees (UNHCR), an organization he has built a relationship with over the past two decades.

UNHCR had set up a treatment center inside an arena. Outside, hundreds of refugees waited all day to enter, be counted and receive advice and help.

“So I walked the line and did these little 12-15 minute shows,” Verner said. “I would entertain maybe 40 people at a time and then cross the line and do another show.”

A UKRAINIAN CHILD staying at a refugee shelter in Oswiecim, Poland conjures up some fiery magic with the help of Lincoln magician Tom Verner last month. Verner, as part of Magicians Without Borders, gave 24 performances in makeshift shelters in and around the Polish city of Krakow.
Photo courtesy of Tom Verner

More than 95% of Ukrainian refugees are women and children, according to UNHCR.

Verner discovered in conversations with many of them that they struggled with three major concerns:

These concerns became very clear at the end of Verner’s visit.

For his latest performance, he took an Uber to the outskirts of Krakow, where a thousand refugees were sheltering in an abandoned mall.

“There was a sort of trashy sadness about the place,” Verner recalls.

Inside the cracked and crumbling concrete building, a large empty store was filled with hundreds of cots arranged in long rows, separated by narrow aisles.

“These were people who, on February 23, had a house, perhaps, with a garden and neighbors, in a community with a church and a school – a place where they may have lived for generations,” Verner said. “And now they were sleeping in an abandoned mall.”

The people staying there came from Kharkiv, Ukraine’s second-largest city and the site of the invasion’s deadliest battles. The fighting there was so brutal that a Ukrainian presidential adviser called it “the Stalingrad of the 21st century”.

As Verner walked through the mall looking for the manager of the shelter, he could “feel the traumatized and disturbed energy of the children,” he said.

When Verner started settling down and word got around that he was a fokusnik (Russian for “magician”), a child came over and “kinda gave me a hug and kinda asked me for a hug”, he said.

He interpreted it as “thank you for coming”.

“A lot of times when we visit places like this, people who live in these situations feel like the world doesn’t know they’re there,” he said. “Sometimes you just have to show up, that’s all we have to do. It is a kind of source of hope for them. “Someone knows we’re here, maybe something good will happen.”

Verner makes sure of that.

As he continued to move into the mall, more and more children were drawn to him. Some helped by setting up rows of chairs for an audience.

And when the show started, the 10-year-old boys did the same.

“There’s always a bunch of them,” Verner said with a laugh. “It’s their job to find the stuff, to crush you. “Open that other hand!” It’s in there! In this case, they said it in Ukrainian, but I’ve been listening to Cubs say it for 40 years, so I knew what they were saying.

“When I do magic for people in difficult situations like this, it’s not just to amaze and amuse, but it’s also to inspire hope that the impossible is possible,” said Verner, referencing a quote from the legendary Harry Houdini. 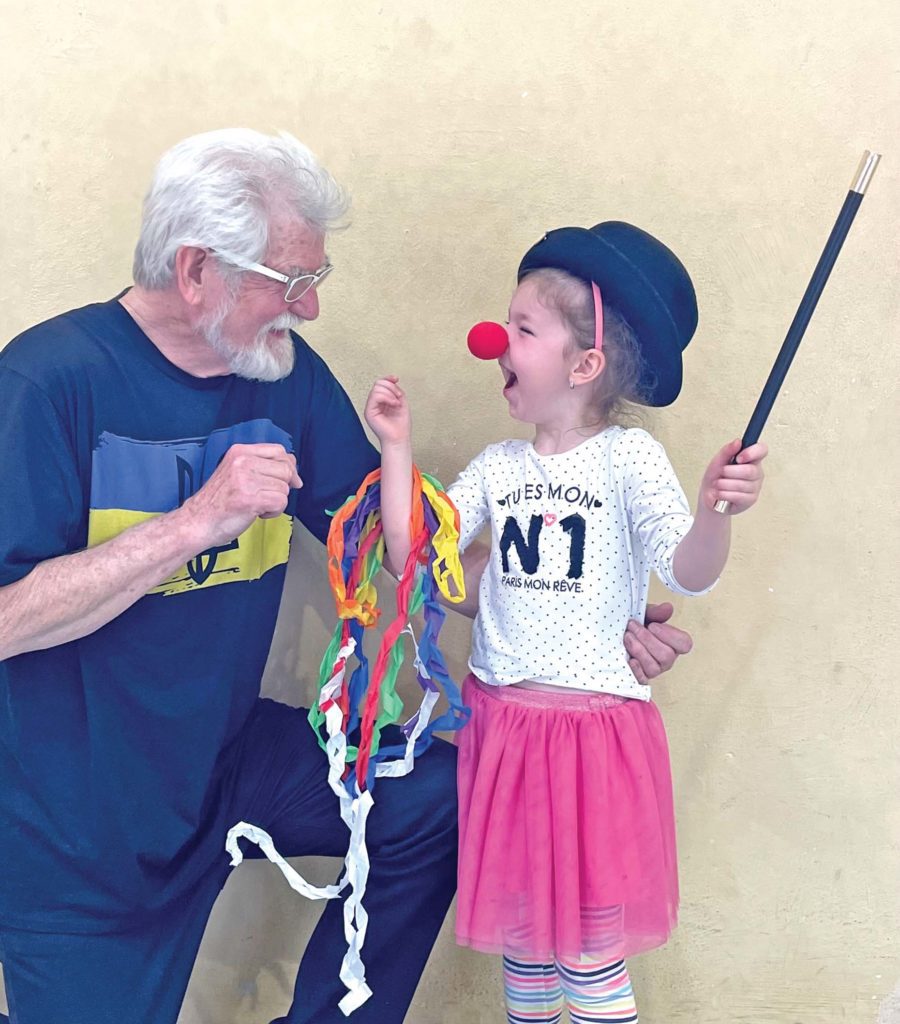 LINCOLN WIZARD TOM Verner shares a laugh with Yasmin, a child from Ukraine staying at a refugee shelter in Korzkiew, Poland last month. Verner, founder of Magicians Without Borders, toured eastern Poland for 15 days, performing to thousands of Ukrainian refugees who fled the Russian invasion of their country.
Photo courtesy of Tom Verner

That night, as always, Verner began his final round of the performance by tearing a strip of white paper into small pieces.

“As I ripped through each piece, I talked about how much the people in the audience lost,” he said. “You had a house, I would say, and it was destroyed. Or maybe you have lost friends and loved ones. Now you will lose months and months, maybe years, living as a refugee.

It’s actually a pretty serious — and risky — moment on the show, Verner said.

A woman named Olga, who was in charge of the shelter, acted as Verner’s interpreter.

“But maybe,” he told his audience, “with imagination and hope and courage, your life will fall back into place.”

At this point in the trick, Verner closes his hand over the torn pieces of paper. But when he opens it again, nothing happened. The pieces did not come back together.

“And I tell them, ‘It’s going to take a while, and sometimes it’s going to be really disheartening,'” he explained.

Verner then stops to speak of the sacred scriptures of the world, of bread and suffering, of strength and beauty.

“Then I start eating the pieces of paper,” he said.

After putting them all in his mouth, he asks the kids to say something like “abracadabra” or make some kind of magical sound.

Magic done, Verner opens his mouth and pulls out a piece of restored white paper, followed by 40 feet of rainbow colored paper.

“And there’s just this surge of hope,” he said. “It’s funny, it’s amazing and it’s crazy, but it’s also been put in this context of ‘Your life is falling apart…and yet it can come back together and be even more beautiful. “”

It was a good trip, Verner said.

“A mother yesterday, who fled the brutal destruction of Kharkiv, told me: ‘This is the happiest I have seen our children since we arrived here two months ago.'”

For more information on Magicians Without Borders, visit magicianswithoutborders.com.