The Radisson RED Gdańsk is part of the redevelopment of Granary Island, located in the center of the Pomeranian capital on the Baltic Sea. The hotel is housed in a reconstructed port warehouse right next to the Motława River. During its reconstruction, the original walls were kept, giving the building a truly unique loft-style appearance. The property enjoys a prime location at the northern end of Granary Island and is connected to the main town by a newly installed footbridge.

The hotel consists of 30 rooms and suites, some of which have a mezzanine with an extra bed, as well as four one- and two-bedroom suites up to 50 m². The rooms offer a magnificent view of the Motława and the city with the famous Gdańsk Crane. The interiors are designed in an eclectic and playful style with surprising decorative elements that play on the history and location of the building. The property is home to the Whiskey in the Jar steakhouse as well as a take-out station located in the lobby. Guests of the Radisson RED enjoy access to the public areas and amenities of the Radisson Hotel & Suites Gdańsk, including its restaurant and bar, as well as its fitness and wellness area, located just 200 meters from Radisson RED Gdańsk. 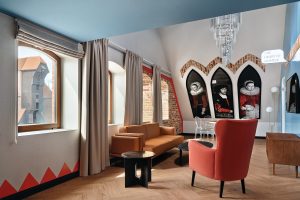 “This new property is a unique place, full of energy, design and style,” said Maciej Głownia, General Manager, Radisson RED Gdańsk. “We look forward to welcoming our guests and introducing them to the rich and interesting history of Granary Island and the vibrant atmosphere of Radisson RED’s fashionable city life.