THEY call Edinburgh the Athens of the North, but that’s ridiculous; it’s much more beautiful than that.

The perfect symphony of geology, architecture and humanity, the Scottish capital is both elementary and elegant, severe and sublime, serious and… absolutely hilarious.

Draped at the foot of an extinct volcano, between the slate gray North Sea beaches and the rolling hills of Pentland, it’s a living geography textbook. The warm stone streets of the Old Town, a chaotic riot of cobblestones, towering gables, spiers and chimney pots, face the New Town – with its orderly grid of Georgian terraces and squares so refined they would give Bath or Cheltenham a dilapidated appearance.

In the middle is a ravine – once a loch and now a formal garden – and the towering glory of Castle Rock, crowned by a fortress that dates back, in part, to the 12th century. It is a constant companion, the castle. Its glowing, no-frills shape greets you at every turn.

It’s a heady exotic cocktail – one that would be worth traveling the world to see, but can be yours in about seven hours – relaxing on a train or hopping in the car.

I took the latter, the boy and I, breaking up the admittedly grueling drive north for a night in the ‘big country’ of the Durham Dales and a day of walking along glorious Upper Teesdale to High Waterfall Strength.

We arrived in Edinburgh in the early evening as the setting sun turned the warm, creamy stone of New Town’s West End to golden amber.

The house for the next three nights was to be a sumptuous piece of one of those vast neoclassical West End terraces. The five-star Bonham is a time warp of Georgian sophistication fashioned from three 19th-century townhouses. A deceptively narrow entryway opens into a series of lounges, crystal chandeliers hanging from high ceilings, oil paintings hanging over tastefully streamlined rooms. Rich woodwork, dim lighting, and comfy armchairs give it the feel of an elegant private club, but with more cheer. 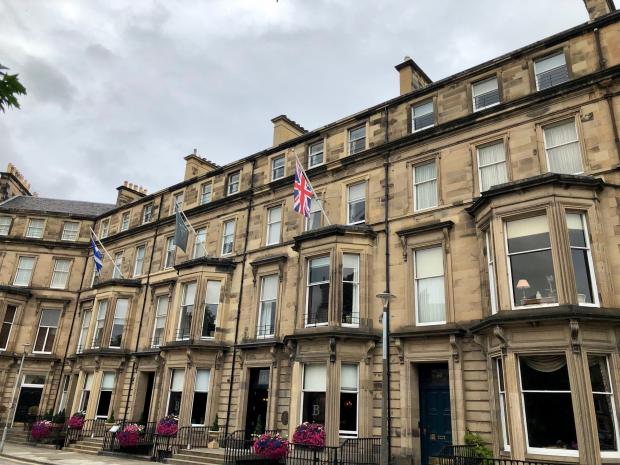 The antithesis of the standard bland corporate hotel, The Bonham has the chic style of a well-designed boutique hotel, but with the warm scale of a grand house and the disarmingly cheery welcome that only Scots can enjoy. can gather.

Our twin room was lovely; full of classic character but devoid of chintz and frills. The whole place was lovingly renovated three years ago.

There was plenty of space, with room for the boy to build Legos and, with less enthusiasm, catch up on his homework, while I could drink coffee while struggling with maps and trying to figure out how take everything we wanted to see with covid restrictions. The need for advance booking requires military planning.

We haven’t done everything. The castle had been full for days and there was no chance of getting in (book before you go!), although we had fun wandering the Royal Mile to the gate, where we gazed out over the Firth of Forth to the melancholy sound of a lone bagpiper.

Everything else was easy including the fabulous Museum of Scotland. This huge 3D puzzle of pieces was disorienting, fascinating and fun, taking us from oversized fossils to space rockets, clansman “claymore” swords, and a taxidermy zoological journey around the world.

The most fun was had in a gallery of historical computers – which disconcertingly featured many of the familiar, bulky little things I wasted my own teenage years playing on – much to the amusement of the kids.

We had a lot of fun on a twilight ghost tour aboard a double-decker bus, its gruesome driver chilling us with stories about the darker side of the city’s history and exploring one of its gloomy cemeteries. His performance was Oscar-worthy — stories of “ghosts” and “Murrrder” delivered with an accent that would have put Dad’s Army’s gloomy Private Frazer to shame.

Best of all, however, were the little surprises that resulted from simply walking the worn stone streets. We bought cheap second-hand leather and Harris Tweed jackets (no prizes to guess which was for which) from bargain-stuffed vintage clothing stores, paints and brushes from a straight-up art shop. release of a novel by Charles Dickens; gaping at wands on dramatically curving Victoria Street – said to be the model for the mystical Diagon Alley in the Harry Potter tales; and feasted on some of the best fish and chips we have ever tasted.

When we weren’t munching on battered cod and exploring, we walked the short distance to the Bonham and lay down or treat ourselves to a dignified afternoon tea – fancy sandwiches, elaborate cakes, macarons and jam and freshly baked cream scones drizzled with bubbly (me), orange juice (him) and pots of Scottish tea for breakfast.

The breakfast is equally impressive. There’s nothing quite like waking up to a bowl of proper porridge followed by a succulent Loch Fyne smoked salmon with scrambled eggs, a smoked Orkney kipper topped with poached eggs or a small -full Scottish breakfast offering not only the usual suspects but also rich peppery haggis and a firm tattie. scone, while enjoying the refined splendor of a Georgian dining room, huge windows overlooking the beautiful Drumsheugh Gardens outside.

It was hard to leave – but as we turned around to see the castle one last time, we knew we would be back. Maybe next time we’ll even go inside.

STAY: On a quiet, leafy crescent, a stone’s throw from Edinburgh’s iconic attractions and shopping areas. The Bonham Hotel is one of the most stylish hotels in town, with 49 elegant rooms and a modern European restaurant. From £149 BB for a double room.

Do you have a story for us? Send us your news and photos here

Register an event for free on our site here