The cost of housing Channel migrants in hotels is climbing to £1.3bn a year… more than £1bn above Foreign Office forecasts, analysis finds

By David Barrett Home Affairs Editor for the Daily Mail

The cost of housing Channel migrants and other asylum seekers in hotels has soared to £1.3billion a year, an analysis has found.

Migration Watch UK, which campaigns for tougher border controls, said accommodation cost almost £4,300 per person per month, equivalent to one and a half times the average monthly salary of an NHS nurse.

The £1.3billion figure was calculated from official figures released in February, which showed 25,000 migrants were in full-board hotels.

Assistance: Police help a pregnant woman as a group of people believed to be migrants make their way up the beach in Dungeness, Kent, after being rescued in the English Channel by the RNLI following a small boating incident on September 22

However, the true cost to the taxpayer is now likely to be much higher as more than 28,000 additional migrants have since arrived in the UK by small boat from northern France.

The number of Channel migrants reaching Britain since the start of the year has exceeded 30,000.

This brought this year’s cumulative total to 30,515 – not including yesterday’s additional arrivals which are believed to number at least 400. The first boat of migrants was brought into the port of Dover at first light yesterday on a Border Force catamaran. Another Border Force vessel, the Defender, brought another group of around 40 people ashore later that morning.

The figure is more than £1billion ahead of the £70million-a-year forecast issued by the Home Office 18 months ago, according to the report.

Hotels are used as a stopgap for migrants due to a shortage of other accommodation such as social or private rental accommodation.

This month, residents of Stratford-upon-Avon expressed concern after a recently refurbished Grade II listed hotel in the town was closed to public bookings to start housing asylum seekers.

Alp Mehmet, president of Migration Watch, said: “As the arrivals of illegal boats have soared over the summer, the number of people staying in hotels has probably also increased.

The Migration Watch report said: “With the public facing a deepening cost of living crisis and soaring energy bills, it is unacceptable that ever-increasing sums of public funds are being diverted to the provision of hotel accommodation on this scale, especially as it is spent in response to growing trends in illegal immigration.

Figures released last month showed the number of asylum seekers receiving taxpayer-funded support rose to 116,109 at the end of June, up by more than 31,000 or 37% in three months.

The total includes those living in longer-term accommodation and some who only receive subsistence allowances.

Migration Watch said the cost of £1.3billion a year for the 25,000 people staying in hotels in February equated to £4,258 per asylum seeker per month. The Royal College of Nursing estimated last year that the average annual salary for an NHS nurse was £33,384, or £2,782 gross per month. 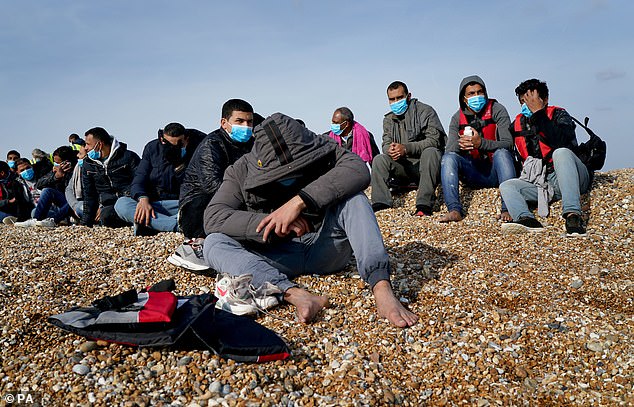 Migrants rest on the beach after arriving in Kent, following their rescue in the English Channel