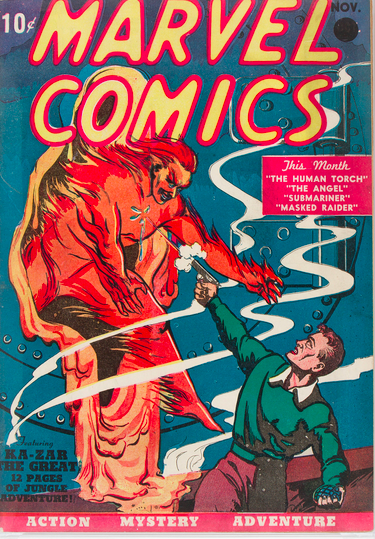 By the associated press

The highlight of today’s history:

On August 31, 1980, the Polish Solidarity workers movement was born with an agreement signed in Gdansk (guh-DANSK ‘) which ended a 17-day strike.

In 1886, an earthquake with an estimated magnitude of 7.3 devastated Charleston, South Carolina, killing at least 60 people, according to the US Geological Survey.

In 1939, the first issue of Marvel Comics, with Human Torch, was published by Timely Publications in New York.

In 1986, 82 people were killed when an Aeromexico airliner and a small private plane collided over Cerritos, California. The Soviet passenger ship Admiral Nakhimov collided with a merchant ship in the Black Sea, causing the two to be sank; up to 448 people are believed to have died.

In 1992, white separatist Randy Weaver surrendered to authorities in Naples, Idaho, ending an 11-day siege by federal agents that claimed the lives of the wife, son and a U.S. Marshal. assistant to Weaver. (Weaver was acquitted of the murder and all other charges related to the confrontation; he was convicted of failing to appear in court on firearms charges and was sentenced to 18 months in prison, but he was credited with 14 months he had already served.)

In 1994, the Irish Republican Army declared a ceasefire. Russia officially ended its military presence in the former East Germany and the Baltic States after half a century.

In 1996, three adults and four children drowned when their vehicle hit John D. Long Lake in Union, South Carolina; they had gone to a monument to the sons of Susan Smith, who drowned the two boys in October 1994.

In 1997, Prince Charles brought Princess Diana home for the last time, escorting the body of his ex-wife through Britain shocked, grieved and angry over her death in a traffic accident in Paris over early in the day.

In 2005, New Orleans Mayor Ray Nagin reported “significant numbers of dead bodies in the water” as a result of Hurricane Katrina; Nagin ordered nearly all police forces to abandon search and rescue efforts and instead stop the increasingly hostile thieves.

In 2010, President Barack Obama ended the US combat mission in Iraq, declaring no victory after seven years of bloodshed and telling those who were divided over the war in his country and around the world: “He it’s time to turn the page.

In 2018, Aretha Franklin, the “Queen of Soul”, was buried after an eight-hour funeral at a church in Detroit, which included Bill and Hillary Clinton, Reverend Jesse Jackson, Stevie Wonder and Smokey Robinson.

In 2019, a gunman carried out a shootout that spanned ten miles between the Texan communities of Midland and Odessa, killing seven people before police killed the gunman outside a cinema in Odessa.

Ten years ago: The Wartime Contracting Commission released a report saying the United States had lost billions of dollars to waste and fraud in Iraq and Afghanistan and was set to repeat this in future wars without major changes in the way the government awarded and managed contracts for battlefield support and reconstruction projects.

Five years ago: On Mexican soil for the first time as a Republican presidential candidate, a firm but measured Donald Trump defended the right of the United States to build a massive border wall along its southern flank, standing for the centerpiece of his immigration plan at a joint press conference with Mexican President Enrique Pena Nieto. The first commercial flight between the United States and Cuba in more than half a century, an Airbus A320 JetBlue, landed in the central city of Santa Clara, re-establishing scheduled air service interrupted at the height of the Cold War. The Brazilian Senate voted to dismiss President Dilma Rousseff. (Rousseff has been accused of breaking tax laws in his handling of the federal budget.)

A year ago: At a rally in Pittsburgh, Democrat Joe Biden strongly condemned the violent protesters and called for their prosecution; he accused President Donald Trump of being behind the divisions that sparked the violence. Trump reiterated that he blamed the radical troublemakers who he said were excited and supported by Biden. The US Open, the first Grand Slam tennis event in nearly six months, began in New York without fans due to the pandemic. John Thompson’s family announced that the former Georgetown University basketball coach has passed away at the age of 78; he was the first black coach to lead a team in the NCAA Men’s Championship. Rwandan police have announced the arrest for terrorism of Paul Rusesabagina, who was portrayed in the film “Hotel Rwanda” as a hero who saved the lives of more than 1,200 people in the 1994 genocide in the country. The Federal Aviation Administration has said it has authorized Amazon to deliver packages by drones; Amazon said it is testing and still flying the drones.

Why you should use points and miles instead of saving them